Over the last couple of years there have been a wave of heavy psychedelic bands coming out of San Diego, so much that Roadburn festival invited a bunch of them over to play last year’s festival as part of the “San Diego Takeover”. One of the bands on the frontline of it all is Oceanside’s Sacri Monti, a spaced out, heavy and progressive five piece signed to Tee Pee Records. Sacri Monti recently released their second album “Waiting Room for the Magic Hour” 5th of July, which they’ll follow up with a UK and European tour, which, among other places, includes London’s The Black Heart on the 18th of July. We had a chat to singer and guitarist Brenden Dellar to find out more about the new album and the progression from the last one. 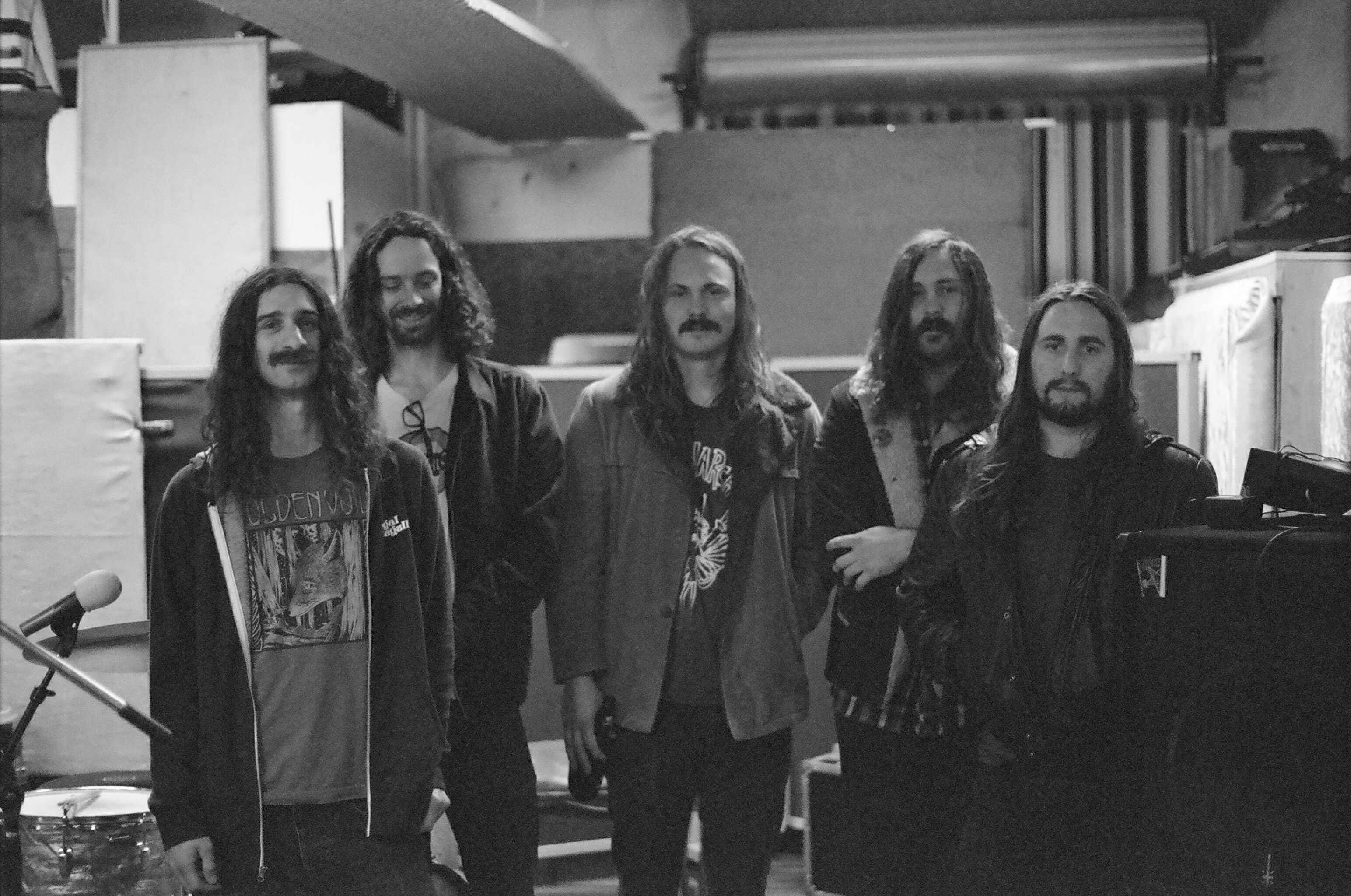 Can you bring us back to the beginning, how did it all start?
Brenden: We’ve been playing together all the way back to 2008, when we’d hang out and jam in different garages and rehearsal spaces. I was playing in another band back then, Color, which is still going, but at the time we were on a hiatus as our bassist Dom was living in Portland. While he was away, I was keen to start another band, but heavier and more spacey, and more progressive and psychedelic. It started out with myself on vocals and guitar, Dukke on bass and Thomas on drums, and we ended up jamming the ‘Sittin around in a restless dream’ riff, and something was just missing. We asked Dylan to join os un guitar and it immediately sounded way more exciting, and enabled us to do guitar harmonies which gave us so many more musical possibilities. We then discussed how cool it would be to get some spacey synth sounds going as well, so we asked Evan to join on keys, which eventually led to organ and us sounding huge. It filled out the sound, and completed the wall of noise we wanted.

You released your second album ‘Waiting Room for the Magic Hour’ just last week, what can you tell us about it? What’s the album title about?
Brenden: We’re super excited to have this new album out! It’s taken us forever to make and we were all getting sick of doing the same stuff over and over. This one kinda just all came at once in a sudden burst of inspiration, which was very nice of the universe to do for us. That brings us to the album title, “Waiting room for the Magic Hour”, sometimes you feel trapped in a world without spark or inspiration, and then for no reason at all you see, hear or feel something that’s completely out of your control and puts you back on track to whatever you were meant to be doing, you just have to be open to those moments.

How would you describe the transition from your first album to the second one?
Brenden: It was kind of a blessing in disguise that it took us so long as it gave us all a lot of time to grow as musicians, people, and more importantly, as a band. We’ve added a lot of new musical elements, while still keeping a lot of the things we used to do to maintain our sound. What was once something that felt like a one trick pony to us that only played “heavy noisy jammed out psych stuff”, now feels like something we can take in whichever direction we feel like, and for it to grow with us like a real living thing.

There is a lot of amazing heavy psych coming out of San Diego and Oceanside at the moment, what’s your thoughts behind this, and what do you think the reason might be for this band boom? Did this start with Earthless?
Brenden: There’s a lot of people doing all sorts of rad shit in San Diego, lots of dream following goes on, whether it’s skating, music, art, photography, surfing or whatever – we are just lucky to be around each other. A lot of bands are formed, deformed and changed, but the music is always an occurring thing. Also, yes, most of the psych rock stuff definitely started with Earthless, I’ll never forget the first time I saw them, it felt like my life had just begun and that I knew what I was going to pursue. I was lucky enough to have Isaiah (Earthless singer and guitarist) as a guitar teacher for a couple of years when I was a kid. He borrowed me a bunch of CDs, and that’s how I got introduced to the “lesser” known, and more obscure rock such as Flower Travellin’ Band’s ‘Satori’, Pentagram, Blues Creation’s ‘Demon & Eleven Children’, Roky Ericksson’s ‘The Evil One’, Amon Düül’s ‘Yeti’ and The Groundhogs’ ‘Thank Christ for the Bomb’ – to name a few. All of those bands and albums still remain massively inspirational and Isaiah is a very close friend of all of us. Earthless are like uncles to us, and have inspired many people to pick up instruments and play, way beyond the San Diego borders.

How’s the summer looking for Sacri Monti?
Brenden: Super stoked for tour! We’re headed to Europe for our third EU tour, as well as our first ever time in the UK, where we’ll be playing London’s Black Heart on the 18th of July. We can’t wait to get out there and play new tunes!