While getting ready for this years Bloodstock, we had a chat to bassist Jimmy from progressive sludge metal band Everest Queen who’ll be playing the Jaegermeister stage on the Sunday. Now, it’s pretty likely that many, and maybe even most of us will be nursing some pretty heavy hangovers by this point, but if like us you’re a sucker for big riffs, then we suggest dragging your hungover ass there to check them out

So, first of all, can we get the lowdown on Everest Queen and how you guys all met?
Adam (vocals and guitar) and I met outside our local venue in 2013 and have been playing together ever since. I approached him because he had a Venom shirt on, and just got chatting about metal. Our mutual friend pointed out that we both wanted to start a sludge or doom band, so I took his number, played it cool, and waited for three days before calling. A week later he turned up at mine with his guitar. We jammed a little and it worked way too well to not pursue it. Adam suggested the name Everest Queen and I thought it was sick because it seemed mystical and not trying to be macho. I had already written our song ‘Catacombs’, and then by the second time he came over he’d written and recorded on a CD what we later ended up calling ‘Curse of the Everest Queen’. I listened to that song for weeks, even taking my bass to work with me and practicing along to it in my car at lunchtimes! Adam knew Brad (Drums, vocals) from one of his old bands at secondary school when he was like 14, and remembered them both saying on a drunken night they should start a stoner band, so he asked Brad and we’ve been blessed / cursed with him ever since. Our first gig was in 2016 just after releasing the EP, supporting Countless Skies. 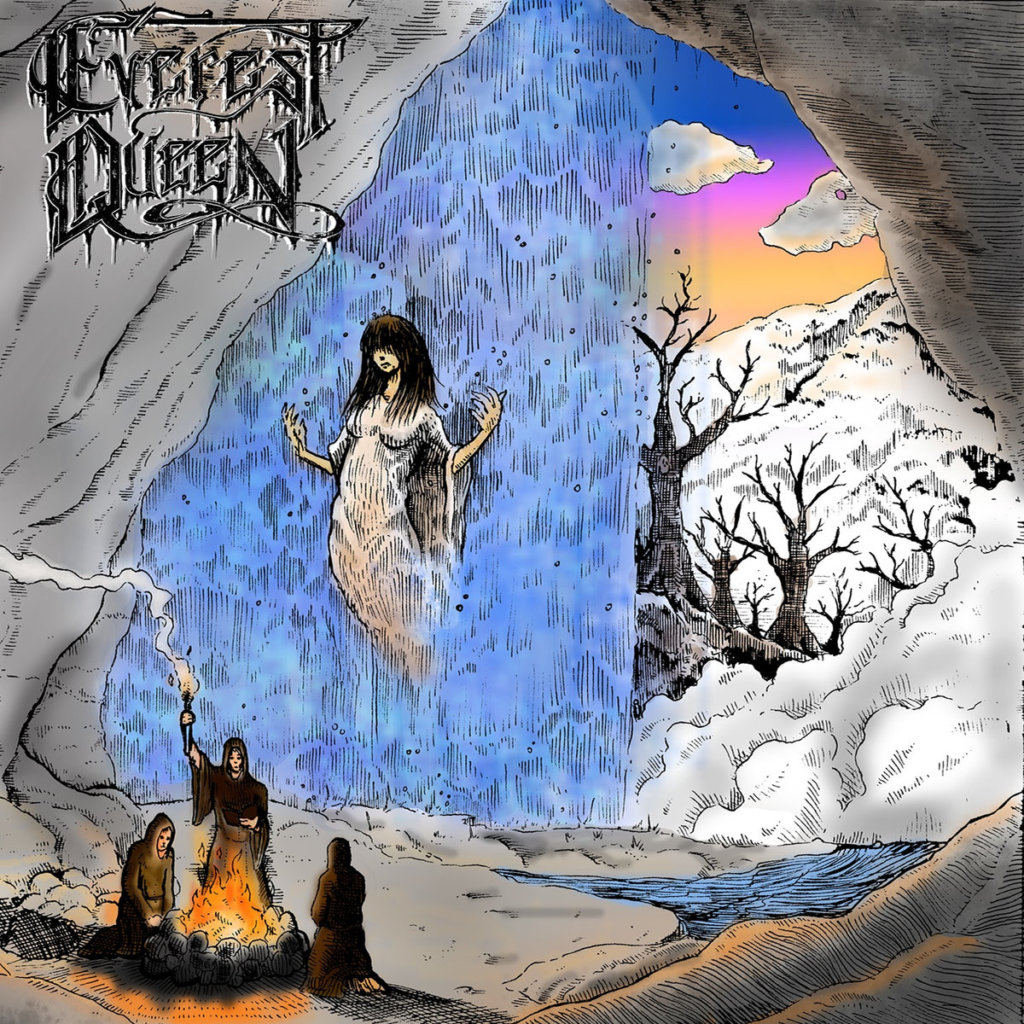 You released your self titled EP early last year, how did you experience the the process of doing so?
We recorded drums at The Practice Roomz in Stevenage, and guitar, bass and vocals at Adam’s home studio. Recording the bass was quite cool as my pregnant wife would come by and see it all happen. It was incredible watching Brad do the drums as I really got to take in everything he does more than when I play with him, his approach is like a culmination of tribal and jazz drumming, and we love getting the quirky yet subtle rhythms in there with each other. Adam’s a whirlwind man, that dude seems to know everything when it comes to guitar, pedals and recording. He made recording fun and he really gees you up to knock it out of the park. Listening back to that EP now still sounds fresh to me and we’re all still in love with the artwork which was done by the very talented Bvrzerk Iam whose work is just mint.

As the EP now’s a while away, have you got any new releases coming up, or maybe even an album?
An album is in the works, but there will be something special happening for Bloodstock, should everything go according to plan, which so far, touch wood, it is. The songs are there and structurally complete, we just need the time to record as we are all incredibly busy even though we still practice at least once a week on average. We will get recording once we have had the honour of setting foot on the Jager Stage at Bloodstock 2017. We had planned to begin recording several months ago but gig offers just kept coming in, in addition to a mini tour with Zhora and Morag Tong, as well as advancing through Metal 2 the Masses. The mini tour, Metal 2 the Masses and other gigs further afield helped us improve as a band as we’ve had the opportunity to play with some high grade bands that we are fans of, we feel this’ll help us achieve our goals when recording the debut album. We’ve got some great ideas on how to follow up the debut album as well, we’ve always got something up our collective sleeve, and whilst we appreciate the wait for the album has felt long, it’s gonna be worth it.

So – Bloodstock! What’s your expectations for this years festival? Are you staying for the whole weekend?
It would be a foul smelling lie to try and be all calm about playing Bloodstock, it’s always consistent in the lineups and it won’t bow to mainstream trends like other festivals have in the past. Fuck those guys man, they know who they are. Expectation wise – we are going to embrace playing the biggest and best metal festival in the UK whilst bringing the riffs. Big, surly, epic riffs that people are going to walk away remembering and craving more of. We always like making new friends, checking out new bands and showing why we are worthy to play this hallowed ground. Sadly, I think we’re gonna miss the Thursday due to Brad and I starting new jobs that week, but I’ll be checking them out regardless via youtube, bandcamp, whatever – why wouldn’t you at least check out new music when it is right at your fingertips these days?

Who are you guys most excited about seeing at this years festival?
Ohhms, Zhora, Mist, Bossk, Inquistion, Corpsing, Iron Rat, Hundred Year Old Man, Ba’al, Atragon, Hatebreed mainly because the song ‘Destroy Everything’ makes me think of my 2 year old son being let loose in our nearest Lidl. Biggus Riffus and Hanowar look like they will feed the need for some epic riffs and classic metal.

What’s your relationship to the festival, have you been or played before?
I went in 2008, and then again in 2012 for my stag weekend where I was lucky enough to be allowed on stage whilst Grand Magus performed. Cool guys who managed to cross Bathory and Dio, both bands that I love.

What’s your festival essentials?
This year it will be our instruments and music gear but normally ear plugs, wet wipes, toilet roll, water and sun cream. Oh and steamed hams. We’re all about the steamed hams.