At the tender age of 11 or 12, Josh Landau was gifted a Misfits CD from a girl at school, and the damage was done. Born and bred in sunny California, he grew up by the beach surfing the Venice waves and skating empty pools. Years later his band The Shrine has established themselves as one of California’s most important rock ’n’ roll bands, the kinda band you play loudly after midnight while drinking cans of cheap beer and chain smoking cigarettes until the cops knocks and tells you to keep it down – that kinda vibe. 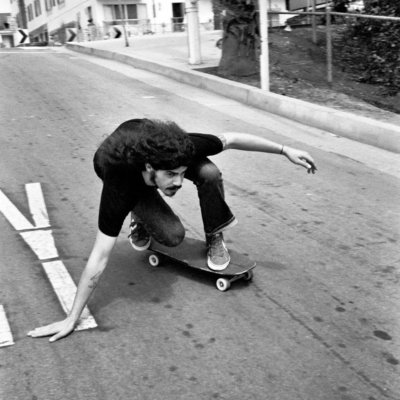 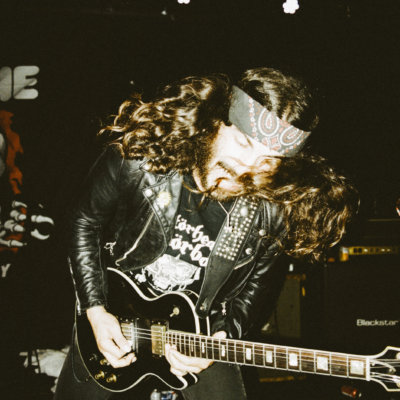 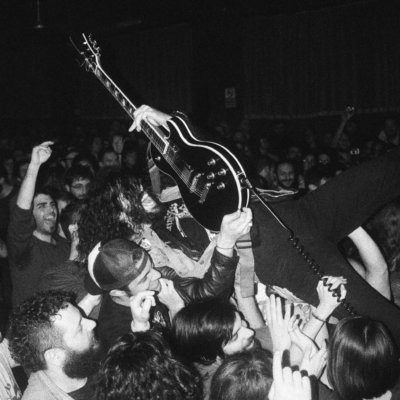 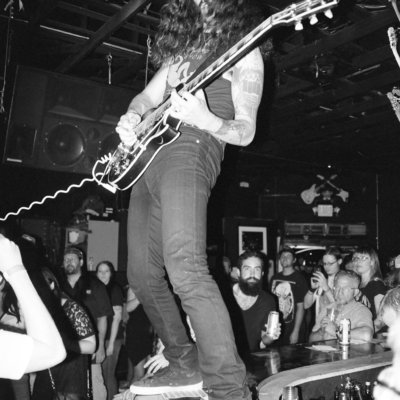 So, Josh, how was it growing up in Venice?

I grew up surfing the Venice Breakwater through middle school and into high school, but once we started skating and looking for pools and hopping fences into abandoned houses in Beverly Hills and Bel Air, it was such a different rush we kinda stopped surfing and spent our hours driving through alleys instead. Growing up here in Venice you can’t avoid the skate scene, I remember when I was like 8 our neighbors would skate in their driveway and me and my little brother would actually take our baby car seats outside and sit in them and watch. They also had an old VW Beatle that made a shitload of noise and would scare us, and they would race it up and down the block. That’s probably our first big introduction to skateboarding.

Did you interest in music come at an early age as well? What sparked the interest and turned you onto the dark path of rock ’n’ roll?

I think I really started playing guitar in 6th or 7th grade, some girl gave me a Misfits and an Operation Ivy CD and it was on, haha. I spent most of high school obsessed with SST Records shit like Black Flag, The Minutemen, etc. and American Hardcore like Cro Mags and JFA and stuff, and then followed all that backwards to The Stooges, MC5 and Hendrix. I was so obsessed I had to find out what Black Flag was listening to and it was like King Crimson and ZZ Top, not punk.

What kinda stuff are you currently listening to?

Gil Scott Heron, Sonic’s Rendezvous Band, The Modern Lovers, The Masters Apprentices, The Pretty Things, Celtic Frost. I just saw Tinariwen play and it was the most epic guitar sounds I’ve maybe ever heard. I love our friends Royal Headache this Australian band as well.

You’re probably most known for fronting The Shrine, but you’re also in another band, Easy, can you tell us about the two and how you combine them?

Well, I went through some fucked up stuff and my life as I knew it kinda fell apart. I didn’t have a choice as I vomited up all these new songs, just songs, not riffs. Heartbreak, sad chick songs. If I held them in and didn’t play them I felt like I’d go crazy and just have idle hands and do bad shit to myself. So I started this group Easy with my buddy Don Nguyen the skater, we had been jamming on like sabbath psych stuff, like you’d expect, and then when I kinda ended up with all these acoustic demo’s we decided to actually start playing shows in this different direction. It’s helped make The Shrine even heavier cause it splits my brain into these two sections and lets them each have a more clear place.

You recently had a second guitarist joining The Shrine – how and why did that come about?

He has been there all along. We met at Santa Monica High School and have known each other for 12 years now. He’s 2 years older than me and was the first dude to play me Thin Lizzy and Blue Cheer. I also remember going to Amoeba with him in his old Volvo station wagon and him buying The Minutemen Double Nickels on The Dime album which was for sure a life changer. 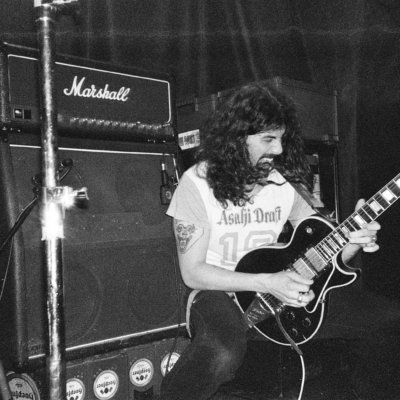 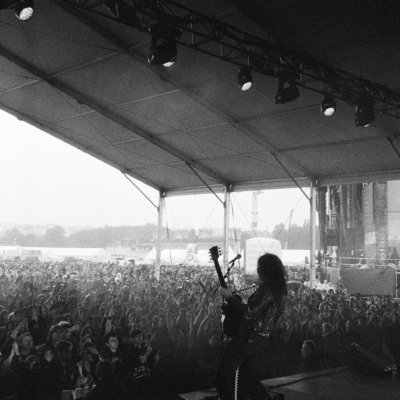 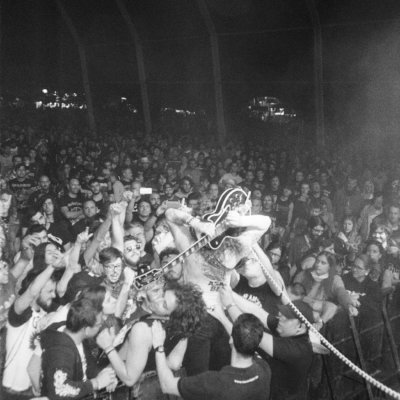 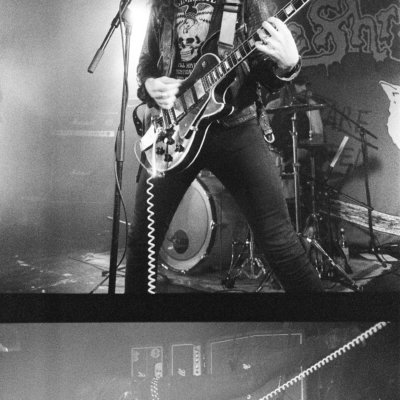 How does a day in the life of Josh Landau look like?

Last Thursday, The Shrine played San Francisco and drove straight back home to LA after, leaving at 2 in the morning and getting in at 8am. I slept for about 2 hours in the van and then drove the last shift like 5am to 8am. We pulled into Venice and I slept till about 2 pm.

Woke up and caught a ride over to Silverlake and went skating with Nuge and Slash, before we went and saw Tinariwen and had our minds blown. After that, we went over to Cha Cha Lounge and DJ’d records, playing a bunch of old hard rock psych shit, and also some stuff like early GG Allin and The Jam.

Woke up so dusted the next day and went and watched those two guys bomb one of the biggest hills in Los Angeles, they were going like 40 miles an hour. Our buddy had the streets blocked off with cops and everything for this new skate network called ETN. After the race we all went to this old dive bar Footsies and played pool. The next day I felt like I was poisoned and gonna die – I collapsed. 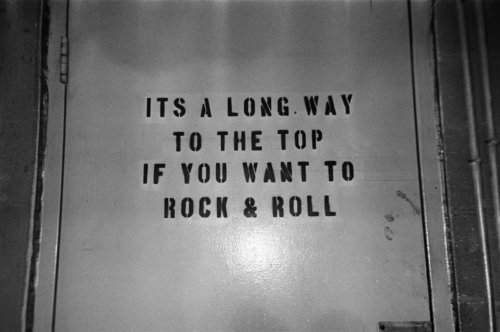 You recently mentioned having a jam with Turbonegro’s Happy Tom when he was in LA, do you tend to get involved with other bands projects?

Yeah, I jammed with Happy Tom the bass player here in our studio in Venice last time he was in town. They were about to go into the studio and he wanted to just throw song ideas around. We drank some beers and even played guitar with my dad for a minute, it was epic. I played him a bunch of new song ideas and we talked about “In Germany Before The War” the gnarly Randy Newman song about the murderer.

When are you gonna take your guitar and fly over to London to come hang with us in the shop and shred out?

I think London is my 2nd favourite place in the world after LA, I wanna hang more. The Shrine are working on a new album and then we’ll be back! 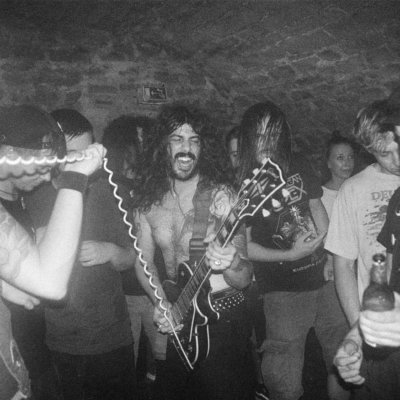 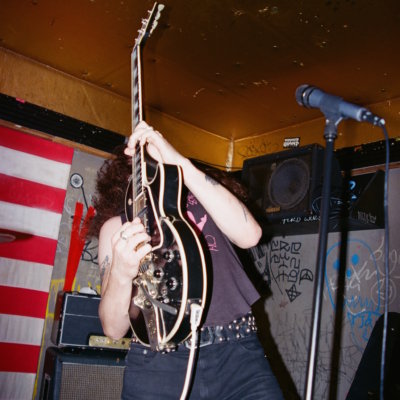 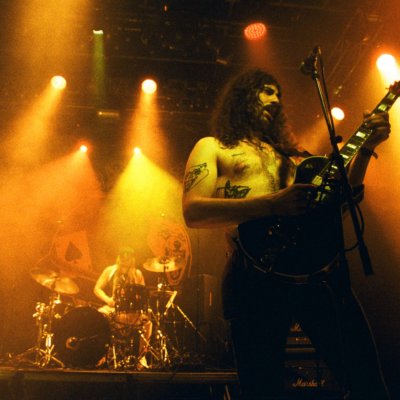 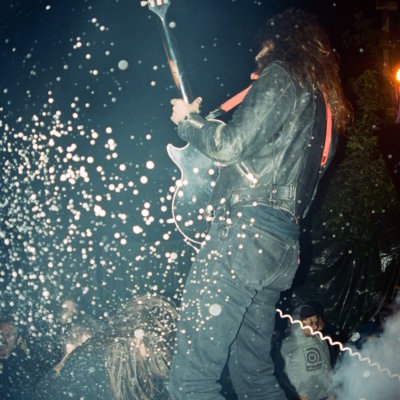