Interview: The Devil and the Almighty Blues

The Devil and the Almighty Blues is quite mysterious in the way that there’s very little, pretty much none information to be find about them online, so we had a chat to them to find out a bit more about the bands influences and how they got together in the first place. 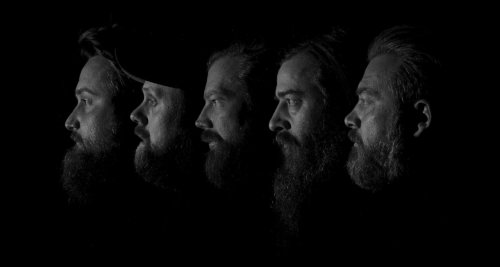 There’s not a lot of information about you guys online, can you tell us a bit about how it all started?
DATAB: We’ve been hanging out together both in front of and behind bars, stages, festivals and studios in Oslo since the early 2000s. Individually, we were involved in everything from punk, americana, garage rock, metal and psych. Kim was in The Good, The Bad, and the Zugly, Kenneth had Shit City and The Dogs, Petter and Arnt in The Goo Men and Torgeir Waldemar doing his own thing.

When the five of you got together, did you have a mutual understanding of the music you wanted to make, or is that a result of all of the above clashing together?
DATAB: We met up in the studio with the aim to play heavy, repetitive, gooey blues. What we all had in common is our mutual love for the electric revolution that happened in the early 70s, when Peter Green left Fleetwood Mac with the song Green Manalishi, ZZ Top fully loaded with Marshall stacks and the king himself, Muddy Waters, released the album Electric Mud. All floating around in this blues soup is also heroes like Jimi, Free, Canned Heat, Clutch and Endless Boogie – to name a few. The playlist we put together will give you an idea of what inspired us when forming The Devil and the Almighty Blues.

As far as albums go, I think you’ve killed it with both of them, and find it pretty impossible to pick a favourite amongst the two. How do you feel yourself that you’ve developed from recording the first record?
DATAB: We’re slightly more patient now, and allow ourselves, even more so than on our debut album, for the song to take as much time as it needs to be completed.

How do you work together as a band, do you meet up on a regular basis to work on new material and maintain the old one?
DATAB: We meet up in the studio when we’ve got work to do, whether that is working on new songs or improve the ones we’ve got before an upcoming tour. Besides that we bump into each other on a regular basis on the road with various bands.

As an Oslo based band, how would you describe the Oslo music scene? Is there any other Norwegian bands we should look into?
DATAB: The music scene in Oslo’s kick-ass! When it comes to other Norwegian bands, check out Kosmik Boogie Tribe, Lonely Kamel, Spectral Haze, Electric Eye, and our label friends Heave Blood & Die, Monumentum and Reptile Master from Blues For The Red Sun.

You’re hitting the road with Blues Pills later this year, how’s the expectations towards that? And is there any chance of the five of you maybe swinging by London at some point?
DATAB: Playing live is one of our favourite things to do, and to be able to travel around with Blues Pills while doing so is just an added bonus. Good venues and good people, what more could you want? Ah, London though, that would be awesome. We’re trying to get some more dates together for winter, and hope London and the UK will be a part of that.