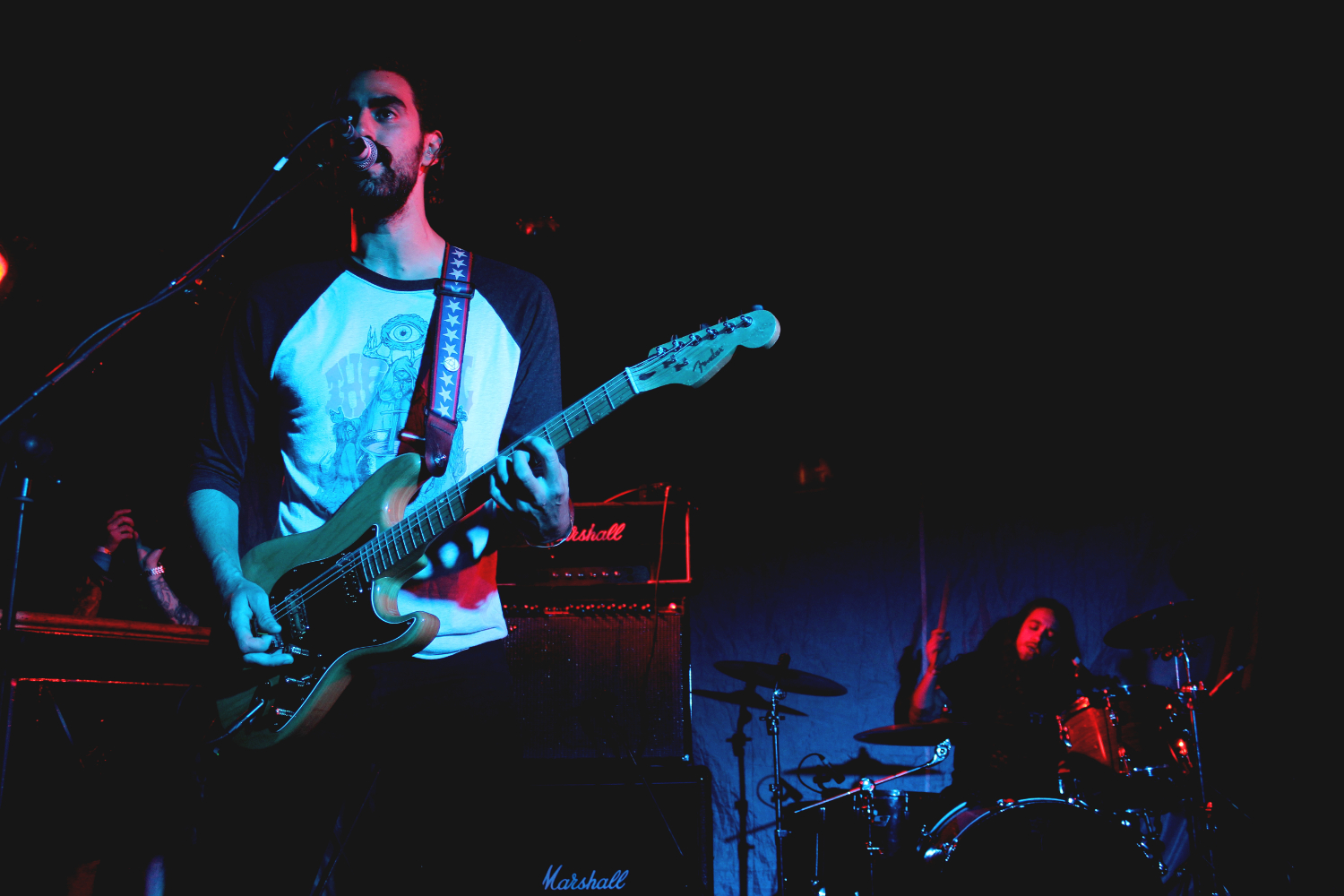 As King Buffalo announced their first ever UK tour alongside heavy psych band Elder, it didn’t take me long before getting in there to set up an interview. The Rochester trio’s eerie but melodic 2016 album ‘Orion’ is regularly played at The Great Frog, and is one of those debut albums that just knocks you out as you get excited about the musical journey you’re about to embark on with them for the next couple of years. At the day of the interview it was raining more than I can remember it ever doing in my time in England, and I pretty much stood face to face with the wrath of mother nature herself while leaving the house and heading to the Camden. The interview was conducted in the backstage area of the Underworld, surrounded by gratified walls that reeked of decades of beer and whiskey, I sat down in a sofa so low and close to the ground, I was sure I’d need medical attention when I’d ever try to get back up. Next to me on the sofa, I had various members of Elder making guest appearances – some having dinner, others making sweet music in GarageBand.

There’s not much to find about you online or anywhere else for that matter except for your music, which in many ways is a good thing, as that’s what it’s all about and it speaks for itself. Still, it’d be cool to get to know you guys a little bit more?
Scott: We started playing together in September 2013. At the time we were in two different bands in the same kind of genre and scene both based in Rochester New York. My band split up, and I spoke to Dan and Sean about possibly playing together. Dan and I knew each other from high school where we’d played friendly competition shows together. We started jamming, and already at the first practice we wrote ‘In dim light’, and at the second practice they’d decided to quit their other band to start a new one with me. We jammed for a few months before we got asked to go on tour with All Them Witches for their upcoming release of ‘Lightning at the Door’, and had to come up with a band name pretty much on the spot. I knew those guys really well as my old band had toured with them three times, so they invited us to come along with them and I was all like ‘Yeah man, you haven’t even hear my new band, but sweet, thanks!’ We were in an RV with them for like 17 days, it was great.

Prior to this interview, I spoke to All Them Witches Frontman Parks who had this to say about you all;
«I feel like gushing over a band for their music has been done enough, so instead I would like to say that one of my favorite band traits to see is when a band comprises of all alphas. King Buffalo is a band that isn’t afraid to ask for what they need, when they need it, and can argue you under a table if you don’t have it. They aren’t afraid to say when something isn’t right, and I find that to be a desirable quality in these times. A band full of alphas that can argue and resolve and still be completely personable and genuine will continue to progress and not get bogged down.»
Michael Parks, All Them Witches.

Scott: Wow, he is such a linguist. I mean, yeah. Alphas though, not so sure about that one – I say that now, then we’ll all be ripping our shirts off to prove a point next time we see him. We can definitely argue those guys under the table though, and there’s been many a time I’ve done so with Parks, I love those guys, and they’re obviously amazing musicians as well as good people. It’s kind of the same thing I get with the Elder dudes, another band I didn’t really know before they came to our home town and played. We were both on the Magnetic Eye Records ‘Electric Ladyland Redux’ record and I went and saw them cause I wanted to schmooze. At the show, I was all like ‘Holy shit, these guys rules!’, picked up the record an listened to only Elder for about three months after that. All of a sudden we’re at the same label and touring Europe together. Anyway, the resemblance between Elder and All Them Witches is that you’re there watching them on stage being all stoked because they’re Elder or All Them Witches and so incredibly talented, then they get off stage and they’re just your mates than you hang out with and it isn’t really a big deal. 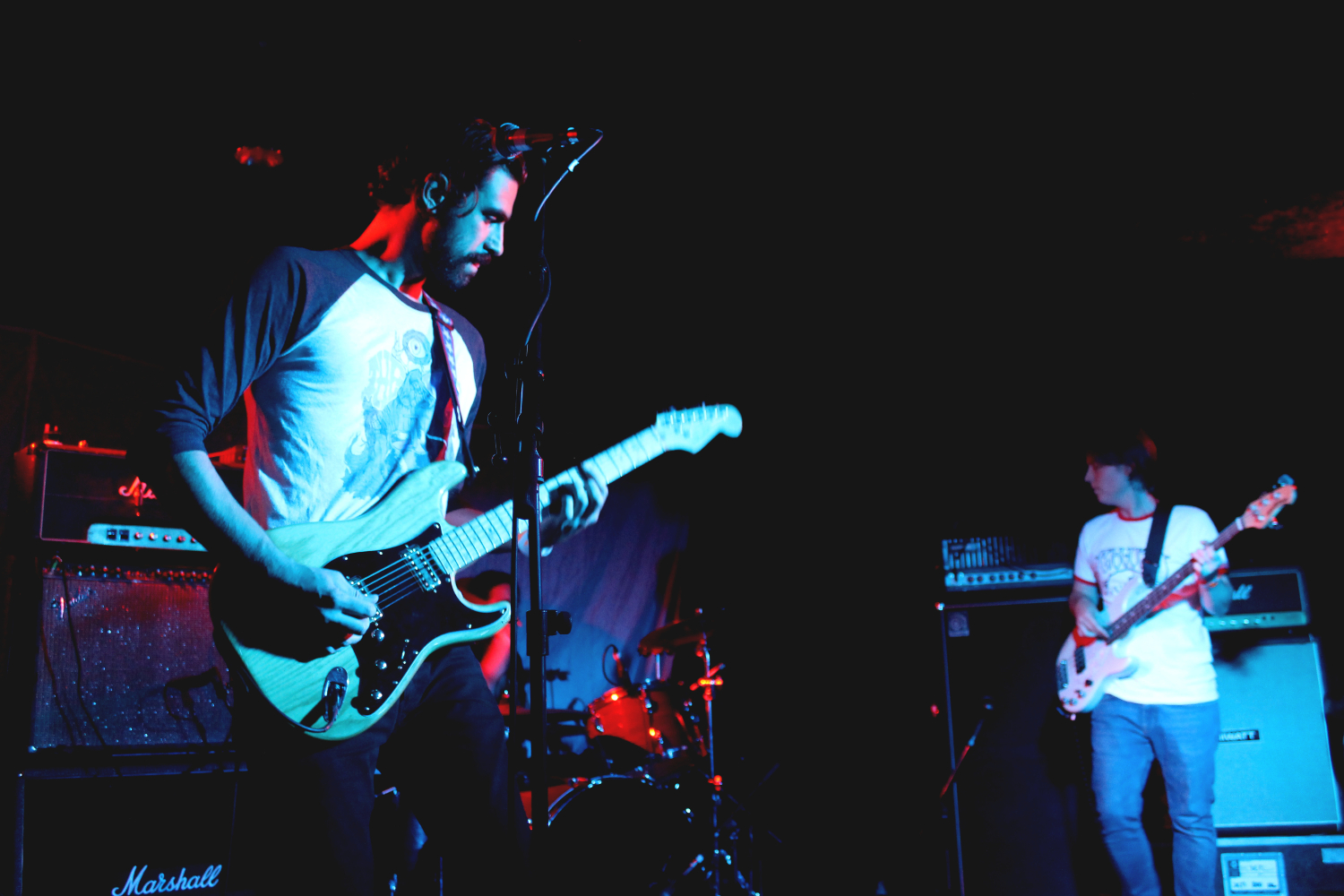 This tour you’re on now is your first time ever in the UK and Europe, how is that compared to touring in the US?
Scott: Same, but different. Elder’s obviously got a much bigger following we do and they’ve been over here six times now, so for us, it was important to have that safety net, to have someone showing us the ropes. Touring the states, even if you do something dumb there’s always someone to call, or you’ll in a way be close to home even if you aren’t. Having Elder who’s seen and done it all before means less trouble for us. The crowds have been great and we’ve even had a few people saying they’ve come out to see us specifically which is really cool.

Your debut album ‘Orion’ is a truly great record, and as far as genres and categories goes, I think is quite hard to pin down – which is a great thing! You’re quite heavy while still melodic, and even melancholic at times.
Scott: We did a soft release last March where we did 160 CDs which surprisingly sold out in three days, then we ended up self releasing it in August as we were speaking to different labels but weren’t quite happy with what any of them had to offer. Then in December we were approached by Stickman who’s got bands such as Elder and Motorpsycho so we ended up signing with them. When making music, we meet up very regularly and work together – I’m not saying we always contribute 33.33% each, but it’s something we all do together and it works well for us. Everyone in the band listens to different shit, and personally I don’t even listen to that much music anymore, which sounds really fucking dumb. I’ve spent so much time studying music and drums, that I don’t get as much enjoyment out of it anymore as I studied it so hard. I’m pretty much self taught, so it’s been a lot of me rewinding over and over again, and just taking and breaking the music apart when I listen to it. The way I tend to find new music now is when I see someone live that I like, and then I’ll go through their catalogue. I obviously like all the classics band like Zeppelin and Sabbath – as for drummers I like Keith Moon, Mitch Mitchell, John Bonham, Bill Ward – they’re all phenomenal and I want do to everything they do, but I can’t – but I really want to, and maybe one day, I’ll be able to. But yeah, that’s me. Dan (Bassist) randomly loves hiphop, while Sean’s got a very eclectic taste with everything from Frank Zappa to Devo. I guess our music is all of our tastes combined as we tend to put equally as much effort into what we do and the music we make.