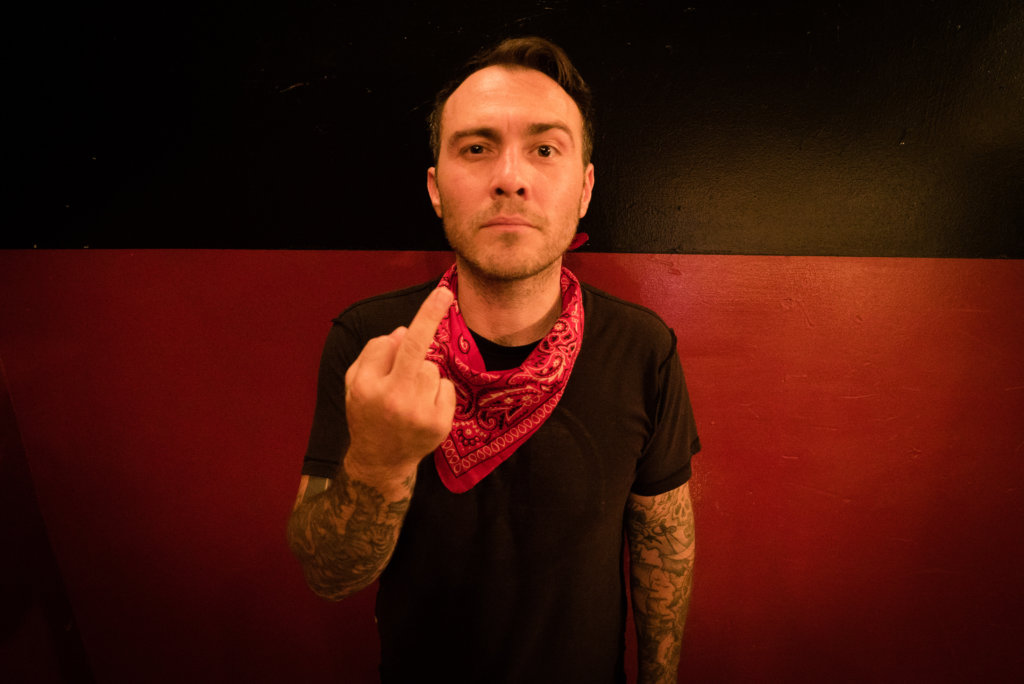 At a young age, Jorma Vik heard John Bonham play, and the damage was done. Decades later, he’s been in various bands playing everything from latin percussion to punk, toured the world excessively with The Bronx and as of last year, joined Eagles of Death Metal. We had a little chat with him to find out more about his musical background and how he’s finding life in one of the funnest rock ‘n’ roll bands there is.

How was your relationship to music growing up, has it always had a big part in your life?
I grew up in a very musical family. There was always music playing in the house. As a child I gravitated towards the drums and my parents were extremely supportive and encouraging.  I remember being maybe 5 years old listening to The Police, who were the hot shit pop band at the time, and playing air drums along with Stewart Copeland. A few years later my grandfather gave me a drum kit, my parents turned me onto John Bonham and that was it. It was all I could think about. I sat in a cabin in the woods playing along to Zeppelin records for 7 years, moved to LA to further pursue music and here I am now – broke, bitter and pushing 40 (kidding).

Can you give us the lowdown on a few things you’ve been up to between the cabin and now?
My parents musical taste was very broad and so became mine. The first group I played with when I was young was a Latin percussion ensemble, which strangely enough would prove to be extremely helpful later in my life. I played in various bar bands doing blues standards, having to wait outside till the band went on because I was underage. I had a punk band in high school that played basement parties in and around the Seattle area. Then I moved to LA when I was 17 and started a band called Death On Wednesday which did some touring and was fairly popular in Southern California.

When I was 22 I started a punk band called The Bronx and toured the world with that for 14 years. During that time we also started a mariachi band, Mariachi El Bronx which is where the knowledge of traditional Latin and Afro/Cuban rhythms from my past were very useful.  In my off time I record and tour with other artists and bands in various styles of music. If you’re looking to become a career musician I can’t stress enough how important it is to “diversify your portfolio”. Open your ears and familiarize yourself with shit you haven’t heard before. The more things your brain has to reference, the more interesting and unique your playing becomes. 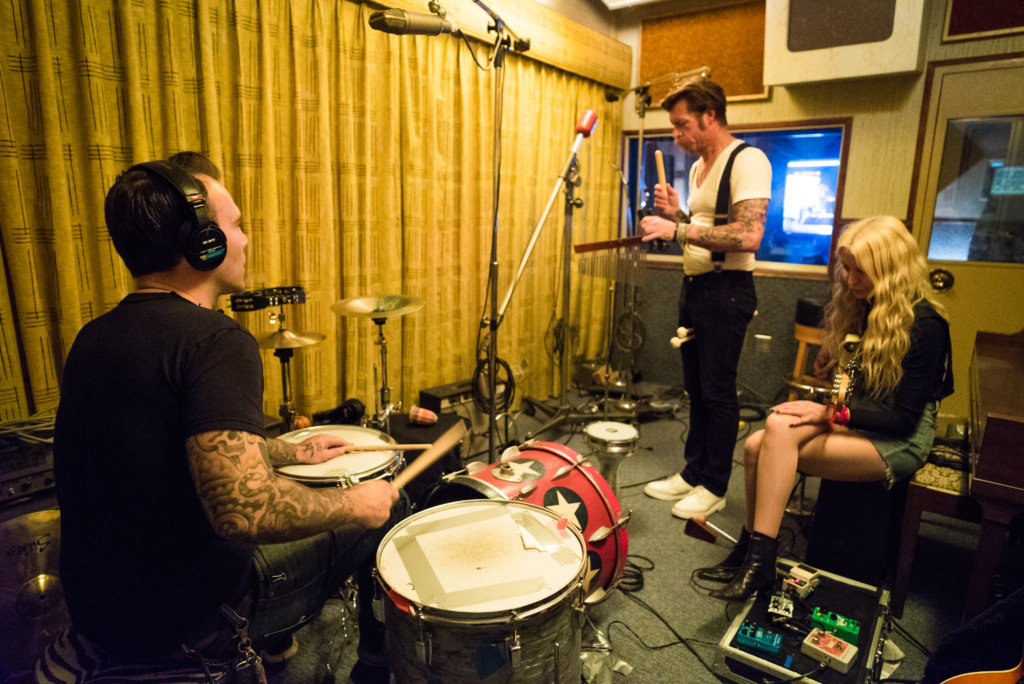 Eagles of Death Metal by @willstockwell

Latin percussion, blues, mariachi and punk, you really do have a broad taste in music – when you’re not playing yourself, what are you currently listening to?
We’re currently scoring the movie Super Troopers 2 so I’ve been listening to a lot of soundtracks recently. The ones Nick Cave and Warren Ellis are doing are fantastic. Another one of my favorites is the soundtrack to a Jim Jarmusch movie called Dead Man that Neil Young did.

You joined Eagles of Death Metal not too long ago, how did that come about?
There’s a popular club in Hollywood called Jumbos at which on any given night of the week you can find women performing interpretive dance in various stages of undress. I was there celebrating the birth of one of the performers when I met Eden who plays guitar in EODM. We shot the breeze for a bit and he invited me to a party at Jesse’s house later that evening.  So I get to Jesse’s house and we start sizing each other up – like two dogs circling each other, sniffing each others asses – then got into talking about music and quickly hit it off. Jesse is absolutely hilarious and has this kinetic energy and excitement about him that is really fun and we had a great hang. First thing the next day I called Josh, who I knew was busy touring the Iggy Pop record which made him unavailable to play drums with eagles, to toss it out that I was available and would love to play drums with them should the position become available. One rehearsal later I was in Sao Paolo, Brazil playing in front of 50,000 people on a stage of musicians I hardly knew but would quickly grow to love and have since become some of my greatest friends.

With the bands history and what terrible things they’ve had happen to them, have you ever been afraid to get on stage and play?
Before the events in Paris my own personal safety while performing didn’t often cross my mind. I had the fortune of growing up in a time and as part of a society where we’re not often faced with such heinous atrocities so an act like this was almost unfathomable. It’s very easy to slip into this mindset on tour wherein you’re living inside this bubble without a whole lot of concern about what’s happening on the outside. I think the attack was a sobering wake up call for a lot of musicians. Not to be scared but to be aware and present in the world we live. 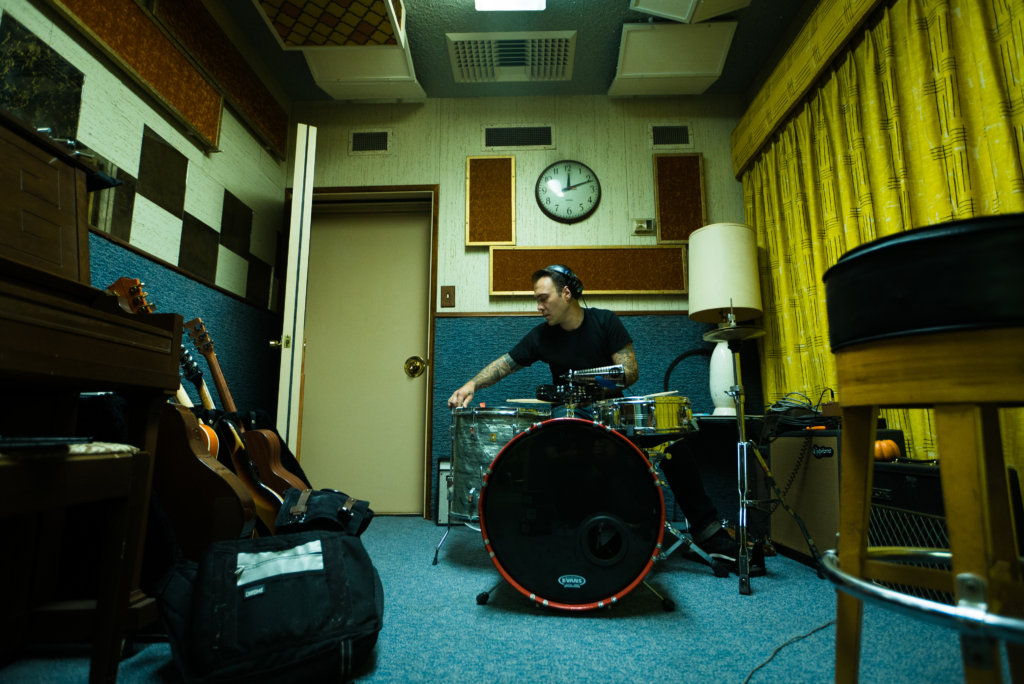 Stepping into Homme’s shoes is pretty brave and you’re doing one hell of a job at it, how’s it all been?
Baby Duck is one of the most uniquely gifted musicians I’ve had the pleasure of knowing. He’s one of those dudes where you can hear a track he’s played on and know right off the bat that it’s him playing, regardless of what instrument he’s on. To me that’s the biggest compliment you can give a musician. His particular stylistic approach to drumming is something I really enjoyed about Eagles’ music and is part of what makes it so overtly horny to the ear. I try to stay as true to that as possible. It’s got a swagger to it that you can’t help but shake your ass to and the songs are fun as shit to play.

Eagles of Death Metal is pretty much always touring and gigging, what do you do to unwind when you get away from the busy life on the road?
I get an over-abundance of social activity on tour so when I get home the first thing I do is grab some camping gear, jump on my motorcycle and get lost out in the middle of nowhere. I’ve found riding a motorcycle extremely therapeutic. It evokes an almost meditative state by demanding so much focus that all the other noise in and around the periphery of your head disappears.

Any last words of wisdom?
If you’re an aspiring musician reading this – strive to create your own voice. Get experimental and inventive. Turn shit on its ear. Fuck shit up. Actually I suppose that applies to most things in life.

We asked Jorma to put together a playlist with some of his favourite songs, and this is what he came up with; ‘A playlist of some punky, garage what-have-yous.’