Introducing the latest addition to our collection, the open band ‘Romulus and Remus’ ring. Taking inspiration from Roman mythology, TGF owner and designer Reino Lehtonen-Riley has created this ring based on the story of the human twins Romulus and Remus, whose story led to the founding of Rome. 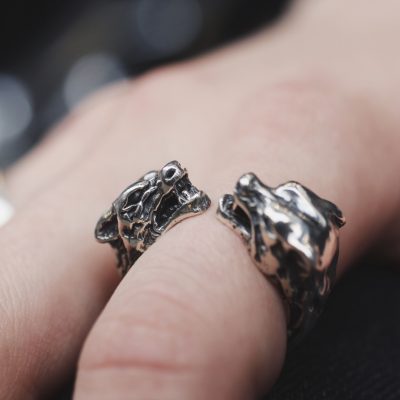 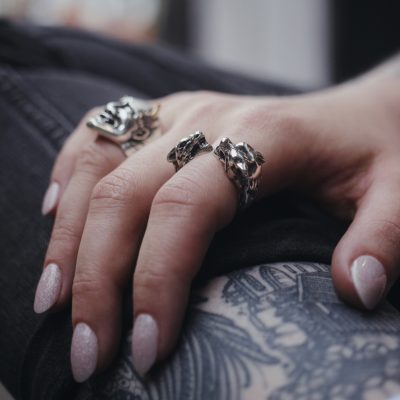 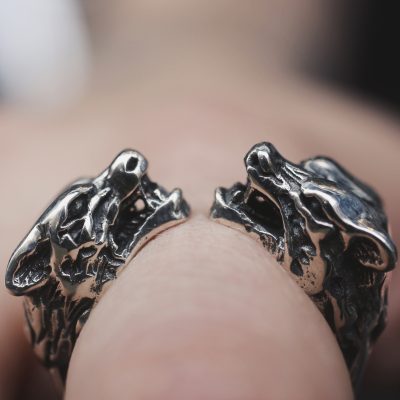 Born in Alba Longa to virgin mother Rhea Silvia, daughter of the former king Numitor who was displaced by his brother Amulius, and the god of war Mars, the twin boys were considered a threat to King Amulius, who ordered them both to be left to die by the river Tiber.

While left there, Tiberinus the Father of the River saved them, and the two boys survived in the care of others, including a she wolf who suckled them, which is also the reason owner Reino chose to depict the twins as Wolves. They were eventually adopted by shepherd Faustulus, and grew up herding sheep, unaware about their true identities.

As young adults, having both become natural leaders with followers within their community Romulus and Remus got involved in a dispute between brothers Numitor and Amulius, and Remus was as a result taken prisoner as King Amulius and their biological grandfather Numitor suspected his true identity. Meanwhile, Romulus was organising efforts to free his brother while finding out all about their past, and joined forces with Numitor to restore him the throne. Amulius was eventually murdered and Numitor reinstated as king, while the twins were reunited and ready to build a city of their own.

Heading to the area of the seven hills, the two brothers couldn’t agree on which hill to build upon, and sought the gods’ approval. Remus then spotted 6 birds, swiftly followed by Romulus spotting 12, claiming to have won the gods approval. This caused further tension between the brothers, and eventually led to Remus being killed by either Romulus, or one of his many followers. Romulus then went on to forming Rome, where he reigned for many years as their first ever king.