Gina Harrison works in the Covid ICU and is an artist, model, creative director, actress, performer, mental health advocate and “professional weirdo” from the UK.

What inspired you to start your creative career?
It was either go to medical school or go to LA. I decided LA. I worked as a theatre assistant in surgery for a couple of years to save up for this and to quench my thirst for medicine – to cut a huge, messy, long trauma story short, I followed my heart and went to America to start to ‘build a name’ for myself. I started to do that, got deported, got PTSD and pneumonia then after time healing started over again in London. As time went on I didn’t want to nor did I find interest in ‘modelling’ – I left the agency I was with maybe 2 months into the contract when I was around 22 and decided to go my own path – gradually I moved away from shooting ‘for other people’ and turned what I was going through and what I had been through into my own art and self-portraits. The cathartic nature of my work is what drives me and being able to use my demons in my art instead of them use me. Now I direct and shoot not only myself but for other people, I also started back on my medical journey and have been working frontline since the pandemic which I plan to continue and study in. Why do I have to choose which box to tick? 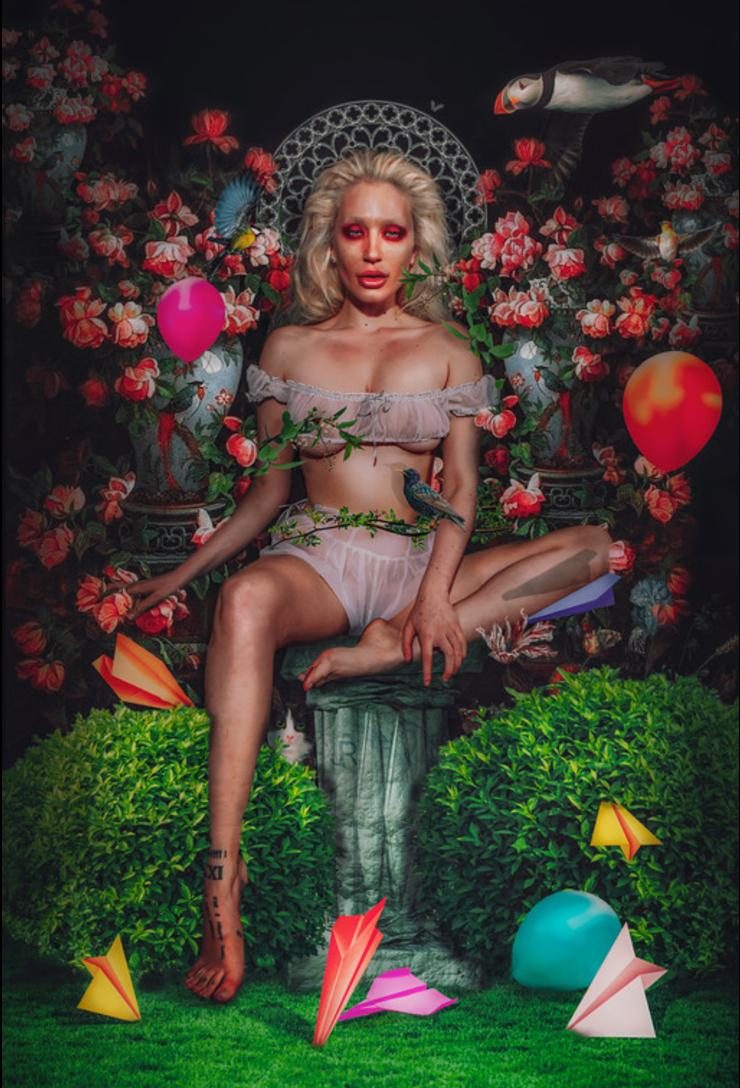 Have you had any ‘pinch me’ moments during your career?
Plenty! From people even buying my prints to shooting with and for my idols, to me just trying to put an aesthetic to what’s in my mind and my feelings so when that’s appreciated it’s truly mind-blowing. I think that’s what’s the best about really being yourself in your art – when it’s appreciated and seen it’s another worldly feeling. Probably my biggest pinch-me moment was shooting with BMTH. I grew up listening to them most of my childhood and adult life so to be contacted by them simply for my creative direction was just something I’ll never get over.

Not only have you been creating the most amazing photos as always, but you also went back to work in hospitals at the beginning of the pandemic, what drives you to succeed?
Ah! I can’t really explain what drives me.. other than never trying to have the feeling that I get when I don’t do what I feel in my heart? If that makes sense. I’m sure you can get understand that when you’ve known great struggle and depression – you just want to do everything you can to not only feel that way yourself but to not allow others to. 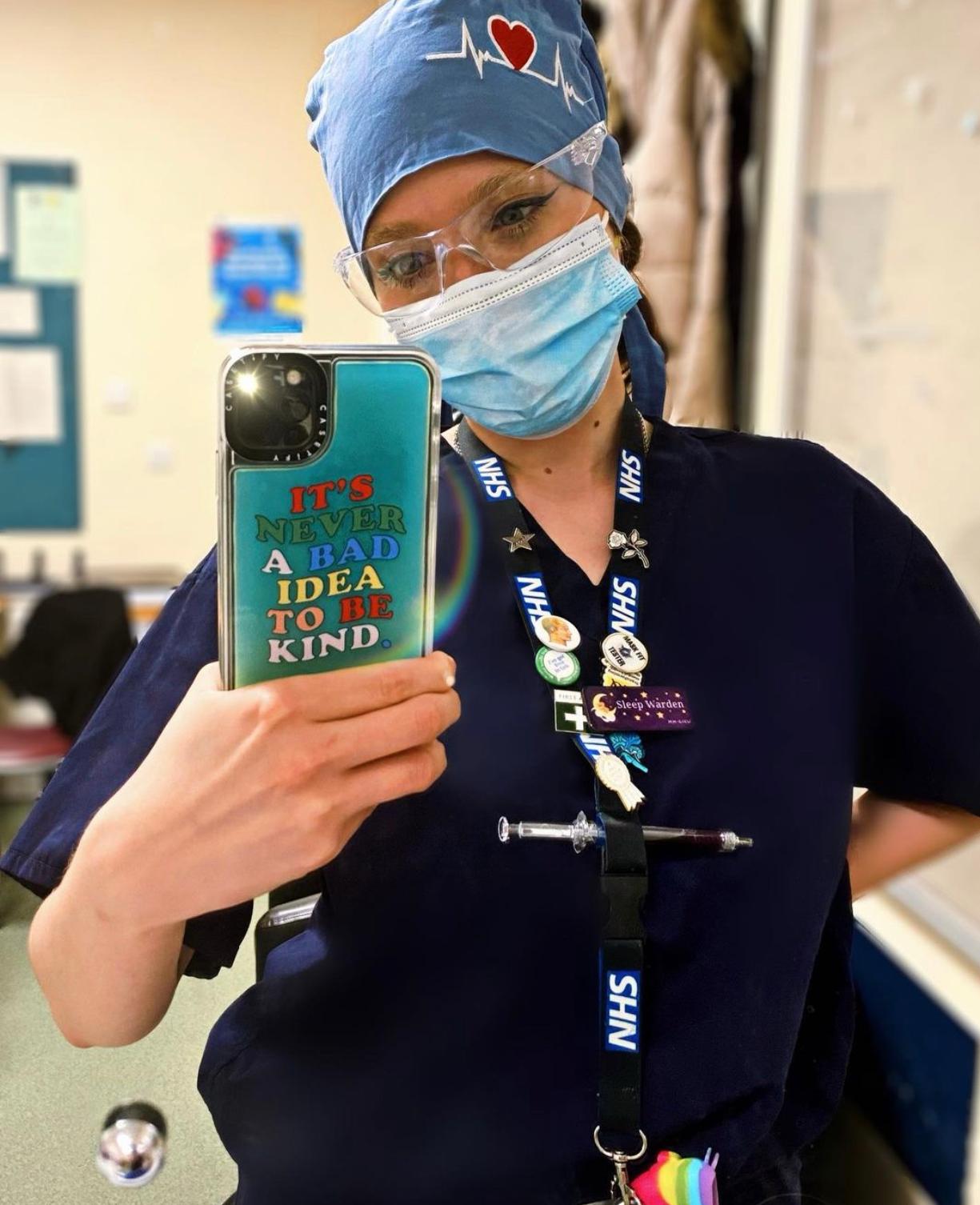 Any tips for ladies to believe in themselves?
I have learned that you don’t need anyone else to believe in you but yourself. I truly believe that we can do whatever we want to and be whoever we want to – the question is what do you want and how much do you want it? I struggled when I started back working for the NHS as I lost a sense of myself and found that I was having to become 2 different versions of myself, but – why? No one was asking me to do this, this was just a socially constructed ideology I had in my head: when I realised I could be and was all the different versions of myself at the same time – it helped me a lot. We are not 2Dimensional characters that exist and are restricted only to tick boxes, we are complicated multi-faceted and deeply intricate creatures that have to embrace every layer of ourselves to become whole. If you think something is missing – try to find what is, and in the same vein of saying yes to things you think you shouldn’t, it’s just as, if not more, important to say NO. Learn to say no to the things that don’t serve you – no to peoples assumptions and expectations, including your own. Sometimes it’s cool to prove yourself wrong as well as right, as we often don’t know how capable we are. I think that people, in general, don’t understand simply how important it is to also give yourself a damn break – rest is just as important as work, rest IS part of the work – whatever that work maybe. I have a tendency to run myself into the ground and I’ve learned the hard way to just give myself a break, literally and metaphorically! The things that don’t serve you now – will.

Who are your favourite women to follow/any women on your radar doing amazing things?
You! I have such a huge adoration for mother entrepreneurs who are also doing their own thing and raising a tiny human! I can’t even fathom that. A few more of my fave women to follow are – my momma (@angelawynnephotography), my dear friend Doris (@noweardesigns) came to London with nothing and now has had a store in Camden for almost 20 years ago and plenty more.

Any fun plans for 2021?
I’ll still be working in A&E and ICU but potentially continuing my studies in September! As well as carrying on with my creative journey and hopefully some cool directing.

What’s your favourite TGF Piece?
Why my G and H Alphabones of course. I cried when I opened it, but I cry a lot.

Favourite Record
My favourite song in the world is ‘Rebellion’ by Arcade Fire.

Favourite Book
Fave authors – Chuck Palahniuk, Kurt Vonnegut, Charles Bukowski. I actually really love Of Mice and Men by John Steinbeck and it’s a book that’s stuck with me since school haha. I really like Do No Harm by neurosurgeon Henry Marsh, but lately, I’m just trying to study and learn as much as I can!