In celebration of International Women’s Day and Women’s History Month, we spoke to some of the most inspiring females in The Great Frog family.

We’ll be featuring four strong, independent women throughout the month; with varied personalities and lifestyles it lends to four individual stories – stories about them, their hobbies, what drives them and the women that inspire them.

First up, our very own Imogen Lehtonen, who has been successfully running the TGF store in Los Angeles for 6 years. She is also a model and has worked for various brands and magazines such as Harley Davidson, EasyRiders and Rolling Stone; she’s been riding for close to 10 years and has been a prominent figure in reviving the female motorcycle scene of recent years. 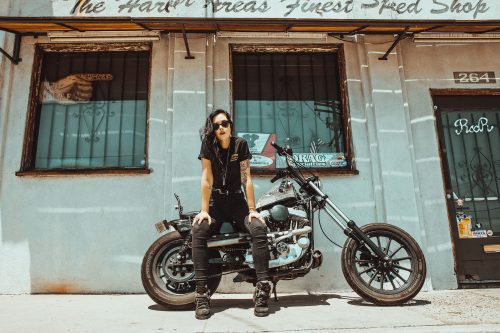 Which females have inspired and supported you the most in life?

The females that have supported and inspired me most in my life come from within my family. I’m really lucky to have such strong amazing women in my family though generations. My Grandmas on both sides have played a really big part in my life growing up. In fact my grandma Dottie on my Dad’s side passed away last year just short of her 102nd birthday, and she is one of my main inspirations, just for her outlook and attitude towards life. She just had it all figured out and was really one of those people with magnetism that drew people in. She was a lot of people’s favourite person. She just had this great way of being and interacting with others, and she was strong. She faced so much in her life with this endless positivity and drive which is sort of unheard of. And I’ve also got my mum, my sister, my aunts – I’m really lucky that all around me growing up my whole life, I’ve had these amazing women who have really always been there for me and inspired me in so many ways.

What is the best piece of advice you’ve ever been given by a fellow female?

I’d say the best piece of advice I’ve been given by a fellow female would have to come from my Mum – she’s somebody that I lean on quite heavily whenever things in life are tough or I need to work through something.

We don’t live in the same country so I talk to her on the phone often, and any time I’m struggling, her advice is always something I hold onto and try to sort of keep it within my repertoire of tools to cope with whatever comes my way in life.

She always tells me to slow down, not overthink things, to breathe and also to just follow my intuition and my gut and that things will turn work out okay. That often in the moment things can be overwhelming, but just have faith in yourself and know that whatever it is that is happening right now will pass and things will be good again – it’s just this constant flow of life. I think sometimes we all need reminding of that simple fact and that always sort of brings me back to zero. Just take a deep breath, try to get outside, try to do something that takes your mind off whatever it is thats troubling you, and know that no matter how bad it is, no matter how big the problem is – things will be okay – I think that’s got me through a lot of really hard times. 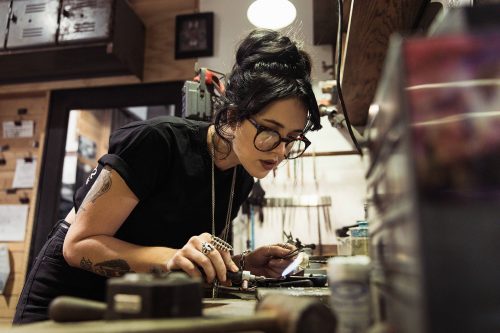 I think it would be impossible for me to pick one female band or musician that’s a favourite, I love and appreciate so much music and especially a lot of women in the music world. A lot of its pretty old school, I love Stevie Nicks, Nancy Sinatra, Dolly Parton, Sade. Whereas in more recent decades, I love Chelsea Wolfe’s music, and my friend Natalie Bergman – her band Wild Belle – she has such a beautiful voice, I really enjoy and appreciate her music.

What piece of TGF do you love wearing yourself or seeing on other women?

The piece of TGF jewellery that I really enjoy wearing and seeing on other women would have to be the coiled snake ring, especially for me it has an importance. I have early memories of that ring, my mum used to wear it in gold when I was a little girl and it was her brother that carved that ring originally, my uncle. So I had these early memories of this ring and I’ve been wearing mine in silver for many years now and my mum still has hers – it’s just worn down after 30 odd years of wear and the scales have gone away.

It’s just such a beautiful ring, and in turn, in the last few years, quite a lot of my female friends have got that ring. It’s funny we have a group of us and often we get together and we’re all wearing it at the same time. There’s just something about that ring that’s really elegant and beautiful and its got very big importance in my life and the other women around me.

I think the female riding community means for me just solidarity, it’s pretty great. I’m not someone who particularly goes to all the women events or rides in women’s groups or anything like that. I ride with my friends who are male and female, and I often ride by myself to be honest, but its definitely the solidarity.

I think the women who get into it tend to be a strong type of woman, [the type of women] that like to get out there and aren’t afraid of adventure and excitement and they’re the kind of people that I gel with. Its really opened doors to a lot of amazing, inspiring women and it’s just nice that there is a community there now where there didn’t used to be. We’re no longer an anomaly and a female on a motorcycle is becoming accepted and respected a lot more I think. 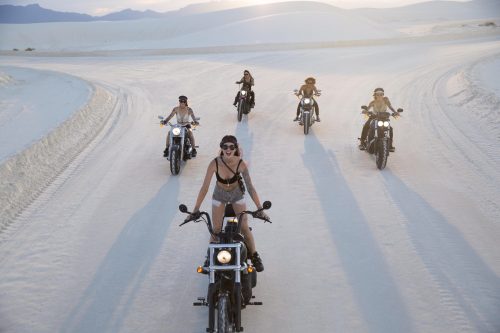 What tips and advice would you give to women who want to get into riding but don’t know where to start?

My advice for women who are interested in getting into riding would definitely be to do a ‘MSC’ motorcycle safety course. I’m sure anywhere in the world you can do these courses and its just a beginners learning course. It teaches you a lot of the skills that you need just to get started – not only on the range, but also in the classroom. You learn quite lot and I think it just gives you the tools to get into it in a more safe and confident way. I would say also go to some events and introduce yourself to other female riders. The most important thing to me is just put down as many miles as you can, just get on your bike as often as you can, and that’s really the only thing that will get you to a place where you feel confident in your riding skills and [mean] that you can put yourself out there safely and have fun.

What do you think men can do to ensure they keep being supportive of women?

I’m lucky enough to have groups of male friends who I feel are very encouraging and supportive and I feel like I can be one of the guys and not really looked at differently. In general I think forget [female] stereotypes – we’re human beings, we’re all different, we have a huge range of abilities and interests. Be open minded and don’t assume you know somebody because they’re female, or [presume] the type of person they’ll be.

But yeah show encouragement and enthusiasm for womens pursuits, just verbally even.. and by your wallet – support any activities and movements that women are getting involved in, that’s something that I think everyone can get down with. 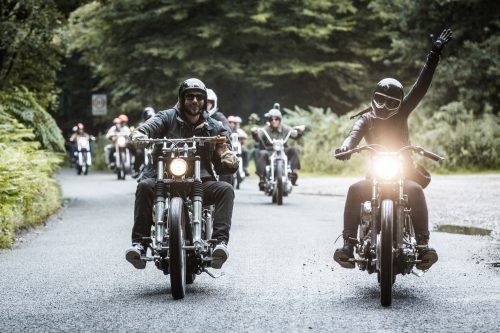