Stones and talismans have fascinated mankind for centuries. Within our collection, we offer a variety of different stone options. Here are some historical facts about the stones we offer which may help in deciding which stone is right for you.

The myth of the origin of onyx says that the goddess Venus was resting on the banks of the Indus River. As she slept, Cupid used the point of one of his enchanted arrows to give her a manicure. The parings of her nails then fell into the waters of the sacred river. Since the nails were of heavenly origin, they sank to the river bottom and were metamorphosed into onyx.

Thousands of years ago, red garnet necklaces adorned the necks of Egypt’s pharaohs, and were entombed with their mummified corpses as prized possessions for the afterlife. In ancient Rome, signet rings with carved garnets were used to stamp the wax that secured important documents.

Turquoise was a ceremonial gem and a medium of exchange for Native American tribes in the southwestern US. They also used it in their jewellery and amulets. The Apaches believed that turquoise attached to a bow or firearm increased a hunter’s or warrior’s accuracy.

Quartz crystal has been used in religious and shamanistic systems for thousands of years. Quartz was long thought by ancients to be solidified water or ice. Because of its connection with water, the stone has been utilized to magically create rain in many parts of the Pacific, including Australia and New Guinea.

It is one of the oldest known gemstones, with ancient records documenting the mining of peridot from as early as 1500 B.C. It is a gem especially connected with ancient Egypt, and some historians believe that the famous emeralds of Cleopatra were actually peridot gems.

The ancient Romans used it for beautiful jewellery and intaglio work. It was also very popular for jewelry in the 19th century. During the Art Deco period between World Wars I and II, large citrines were set in many prized pieces, including the massive and elaborate Art Deco inspired jewelry pieces made for big Hollywood stars such as Greta Garbo and Joan Crawford.

Topaz was one of the stones selected by Aaron for his priestly breastplate. He placed it on there as the second stone in the first row of stones. Topaz is also found as one of the stones in Revelation and is one of the stones of the apocalypse. In Egyptian practices, it is the symbol of Ra, the Sun god, who was the giver of life. In Europe, topaz became strongly linked with Apollo, who is also a solar being.

People in the earliest recorded times believed in the magical powers of quartz. Ancient Roman, Egyptian, and Greek civilizations used quartz crystals as potent talismans. The Romans used rose quartz as a seal to signify ownership, and Egyptians believed the stone could prevent ageing.

According to Hindu mythology, moonstone is made of solidified moonbeams. Many other cultures also associate this gem with moonlight, and it’s easy to see why. Its internal structure scatters the light that strikes it, creating a phenomenon known as adularescence. The visual effect is reminiscent of the full moon shining through a veil of thin, high clouds.

Traditionally, quartz was utilized in the Eleusinian mysteries to produce the sacred fire by concentrating the heat of the Sun to ignite wood chips. Quartz was also common among North American Indians in rite and spell, and ceremonial wands topped with quartz crystals have been found in Southern California. Cherokee shamans, acknowledging the crystal’s power, kept it wrapped in buckskin when not in use. At regular intervals it would be “fed” deer’s blood.

Our stone rings can take up to 21 days to make and cannot be resized. If you are unsure of your ring size or are purchasing a gift, we strongly recommend you choose our “standard size.” If left unworn, you can then return the ring and exchange it for the correct size. 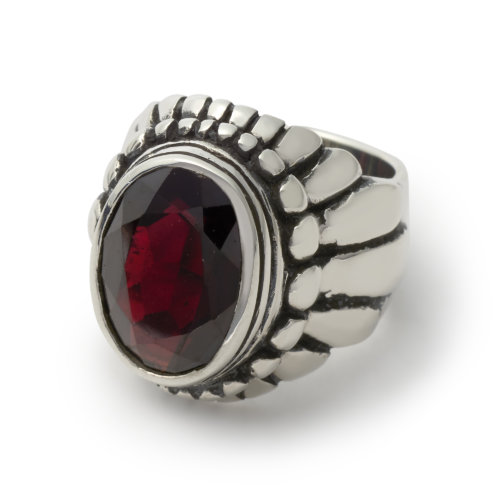