We had to kick off this portrait series with our number 1 customer, Sean Taylor. Sean runs a motorcycle dealership in East London and has been heavily influenced by his Dad who sounds pretty rad to us. In the 70s and 80s, Sean’s Dad was a drummer, a motorbike racer and a roadie for the Rolling Stones and the Beatles.

Everyone at TGF knows Sean. He’s friends with everyone in both Soho and East stores and knows the jewellers too. It’s safe to say nobody has a bigger collection than Sean with over 60 pieces. He owns more TGF than the owner does.

As with quite a few of the stories from our customers, Sean’s collection started from a young age, inspired by his Dad’s TGF collection. Read below to find out more about Sean and his (healthy) TGF obsession. 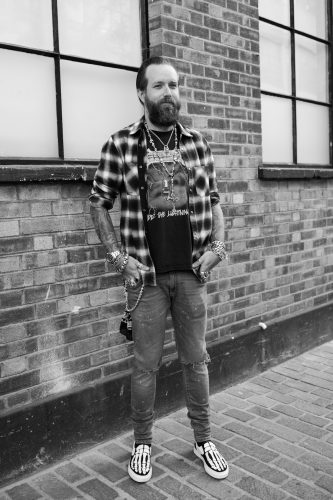 “My dad had a few old pieces but I found the Soho shop myself and have been going ever since. The first piece I purchased was an Ace of Spades Ring which I sadly lost. I just love the family business [aspect] of it all. When I was growing up, I remember seeing all the guys I wanted to be wearing big rings and chains and bracelets, and that’s all I ever wanted. There isn’t a day that I’m not wearing all my rings, two or three bracelets and two or three chains – I feel naked without them.

The most memorable [moment in the store] for me was buying the Rosary. I had been bugging the guys about it for so long, promising I’d buy one once I’d saved some money up. When it came to actually buying it, the guys were great and made me feel great, even congratulating me. Then on the day of collection, Luke called to tell me it was ready and it was like all my birthdays and Christmases rolled into one. The guys had it ready and had even written my name in silver on the box. It was all very magical and they seemed genuinely happy for me to have one at last. That was a fantastic moment, one I won’t forget.

I have around 60 pieces in total and fancy the 13 Evil Skull Ring or the Brat Style Ring. I’m also looking to get the Rock ‘n’ Roll I.D Bracelet for my dad’s 75th birthday.” 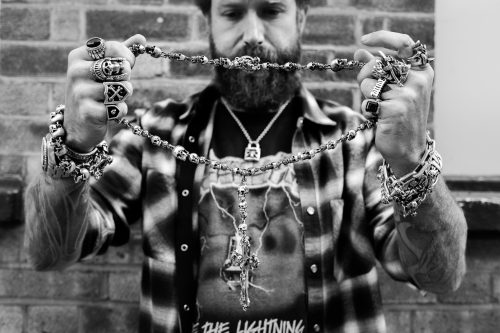 Who would Sean like us to collaborate with next? Guns n Roses.