Ben – or Deadbeat as we know him as – is a bona fide born and raised East End cockney.  He has become a friend of ours over the years, aside from having lots in common his loveable, warm, kind personality makes him impossible to not like.

He’s a construction manager and has been building some of London’s biggest landmarks over past 15 years. Aside from this he is also a writer and has his own fashion label.

Deadbeat first heard about TGF from a family friend who had some bracelets from the 90s and after he saw TGF jewellery in some old photos it jogged his memory, he made a beeline for the Soho store that following weekend and ‘never looked back’. He’s since visited the temporary store around the corner, TGF East and TGF New York. 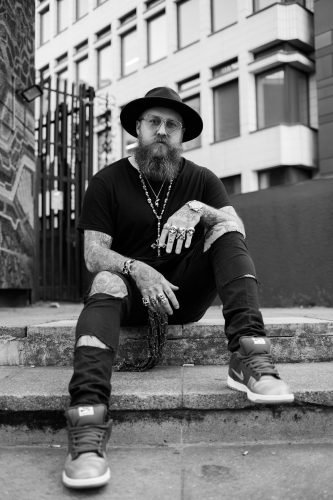 A huge Iron Maiden fan, his first piece from TGF was the Killers Eddie ring. Deadbeat grew up in Leyton, where Iron Maiden originate from, so his love of the band is in his blood. Even despite Deadbeat’s extensive collection, this first ring is still his favourite. He wears a big collection every day, he’s a tall bloke with a big presence and the style of jewellery completes his look. From jeans and band t-shirt to a suit, there’s not an occasion he doesn’t wear his collection with. His Rosary has a special meaning, it’s his talisman that he never takes off. The weighty pendant helps give him focus; it helps to centre him during stressful situations, gives him a confidence boost and makes him feel lucky wearing it. 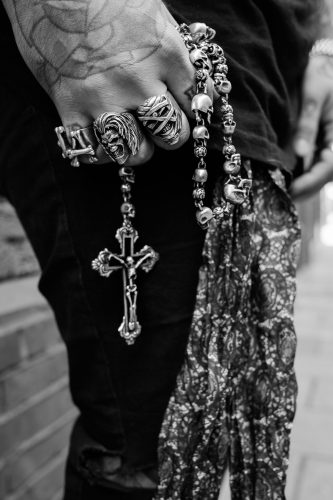 We’d count Deadbeat as a good friend now, and the feeling is mutual. When coming to instore, he said it’s ‘like returning to an old friend’s house’. He now has an annual ritual with his nephew to bring him in every December to buy his mother (Deadbeat’s sister) a Christmas present to help her build her collection and have some special keepsakes from her kids.

Deadbeat would love us to collaborate with Metallica, Guns ‘n’ Roses and Wu Tang Clan and eventually create a watch. Never say never ..